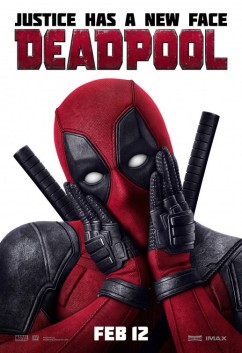 I’ll probably alienate half of the people that read this blog with the following paragraph, but here it goes anyway.

I don’t really care for superhero movies. Like, I acknowledge that they can be good, and there are some that I really do enjoy, but for the most part the box office is just inundated with mediocre films featuring “conflicted,” minimally-developed heroes and scores of over-the-top, CGI-fueled action. It wouldn’t be so bad if it was just one film a year, but that generally isn’t the case as Marvel keeps working to expand its cross-pollinating cinematic universe (which admittedly is a remarkable achievement that I’d give considerably more praise to if the films were better overall), and the excessive productions virtually ensures that the quality will continue to deteriorate over time. I know a lot of comic fans are overjoyed seeing their favourite characters finally come to life on screen, but I share none of that prior investment into the characters. The comics I enjoyed growing up were graphic novels like Watchmen and Japanese manga like Fullmetal Alchemist that had long-form dramatic sci-fi and fantasy stories, I never got into the superhero scene. So I guess, frankly, and in no offence to lovers of superheroes, I just don’t care enough, and I’m tired of all of it.

So when I tell you that I was excited to see Deadpool, and, moreover, that it’s probably my favourite superhero film since the original Iron Man, possibly since Sam Raimi’s first two Spider-man films (which I remain yet convinced are the best Marvel films ever made [I don’t care if Toby Maguire’s Spider-man is “whiny” or a sissy or whatever, those films are incredible and you owe the existence of your beloved Marvel cinematic universe to them, but I digress]), I want you to know that it really means something. Deadpool doesn’t redefine anything, nor does it need to, but it directly addresses a number of pitfalls of the genre with so much wit and charm that you can’t help but have a good time watching it.

For outsiders like myself, Deadpool is the story of a dishonourably-discharged special forces operative, Wade Wilson (Ryan Reynolds), now turned superhuman and seeking revenge on the people that disfigured him while hoping to win back the love of his life, Vanessa (Morena Baccarin). The order in which events are portrayed is a bit convoluted, jumping between flashback and present before moving forward, but that’s all part of the fun, allowing ample space for trademark fourth-wall breaks. Deadpool, the character, is entirely aware that he’s in a film from the first frame to the last and, aided by a wonderfully clever script, it turns the film into a scathing deconstruction of the Marvel formula.

As a critique, the film is more of a satire, and as a satire, it’s less thoughtful than simply wantonly irreverent, like Wade himself. It’s rife with gory violence, foul language, candid (and remarkably sharp) sexual innuendo, and general vulgarity, factors almost completely absent from Marvel’s previous, markedly more family-friendly offerings, mocking their sanitised heroics. Deadpool at once feels far more real, genuine, honest, and human, something even relatable. Deadpool is a true antihero that scoffs at tortured noblemen like Superman and Tony Stark; as he puts it, he’s a bad guy who beats up worse guys. Every piece of the Marvel puzzle is turned on its head, and it’s gloriously entertaining.

Most of the film’s successes are owed to the screenplay, but first-time feature film director Tim Miller certainly demonstrates his own potential here as well. While it’s certainly highly quotable and rides on the back of dialogue for much of the humour, there’s a fair bit of quality visual comedy as well, playing with the framing, character placement, editing, and timing to deliver some truly cinematic laughs. It’s clearly the work of a young director finding his footing (and with a massive studio powerhouse pulling his puppet strings along the way), but Miller has fun with the material and brings it to life well. Most of the acting simply fits the bill, exaggerated performances to amplify the satirical points of the film, but it all fits together snugly. Ryan Reynolds is the standout, carrying the role of Wade/Deadpool with unholy charisma and diabolical jocularity, and he owns every scene, as he should. The chemistry between him and Morena Baccarin as Wade’s girlfriend, Vanessa, is brilliant as well, their shared scenes often bringing some of the best dark banter the film has to offer.

Deadpool is not without its own shortcomings, of course. It doesn’t deviate far from the classic superhero formula (a necessary evil in order to skewer it, perhaps), and the overlapping story structure makes the pacing feel quicker than it is in a weirdly disorienting way. The action at times, especially toward the end, slips toward the gritty, mostly animated, incomprehensible fights from every blockbuster in the last ten or so years. Shaky cameras and frenetic editing prevent things from sinking in at times and rob us of the visceral satisfaction that good action should provide. It veers dangerously close to the territory of muddy and exhausting, if only to be steered back on course by its infectious charm.

This is by no means an artistic masterpiece, far from it. But it also wouldn’t be Deadpool if that were the case. Whether you love or hate Marvel films, if you have a dark sense of humour and aren’t easily offended, this is must-see, pureform entertainment at its finest.

I'm a screenwriter, an aspiring filmmaker, and an amateur film critic. I love film, music, art, theology, philosophy, and soccer. Hoping to move to Ireland and work with the film industry there.
%d bloggers like this: